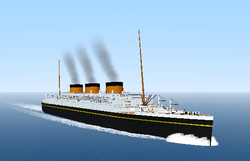 Oceanic was the planned name of an unfinished ocean liner that was partially built by Harland and Wolff for the White Star Line. The ship was to have been the first 1,000-foot (300 m)-long ocean liner. It was intended to be the largest ocean liner for the White Star Line, thus would have been larger than the earlier White Star giants, Olympic, Titanic and Britannic. There are some crossed wires regarding Oceanic's length. Harland and Wolff drew up to three sets of designs for Oceanic between 1926 and 1928. The first set showed and 900-foot (270 m)-long four-funnel liner. The second set drawn in 1927 showed a 935 feet long liner with three funnels. Roughly the same size of Europa and Bremen. The third set showed the 1,010 feet (310 m) long giant with three funnels. The order was placed 18 June 1928, and construction began almost immediately. The work was slowed by a dispute over powerplant; Lord Kylsant who controlled the White Star Line wanted to use diesel-electric instead of the traditional steam power. White Star proposed having over 40 diesel generator sets driving four propellers through geared electric motors. Harland & Wolff was reluctant to adopt this system and by the time all parties had settled on the use of diesel, the Great Depression was underway and hitting the shipping business. Further work on the Oceanic was postponed, and later cancelled due to the collapse of the Royal Mail Steam Packet Company, owners of the White Star Line, as a result of the financial problems of Sir Owen Philips, Lord Kylsant. The Royal Mail Case, as it was known, led to the imprisonment and loss of title of Owen Philips, also substantial changes in accounting and auditing practice. Loans backed by the governments of England and Northern Ireland intended for the construction of the Oceanic were diverted to the construction of the last two ships built for White Star, the Britannic and her near twin sister, the Georgic. These two liners were built with steel from Oceanic, whose partially built hull was subsequently dismantled and recycled after the aforementioned diversion of funds. Based on the third set design drawn by Harland and Wolff, the ship would have measured at least 1000-feet long with a tonnage of 80,000 tons and have three squat funnels, making her appear like a larger version of the Britannic and roughly the same size of her rivals SS Normandie and RMS Queen Mary, along with powerful engines which would have enabled the ship to possibly gain the Blue Riband record for speed. Her extensive interiors would have been, to a large degree, based on the popular Art Deco fashions of the day pioneered on ocean liners by the French Line's SS Ile de France just a few years earlier in 1927. 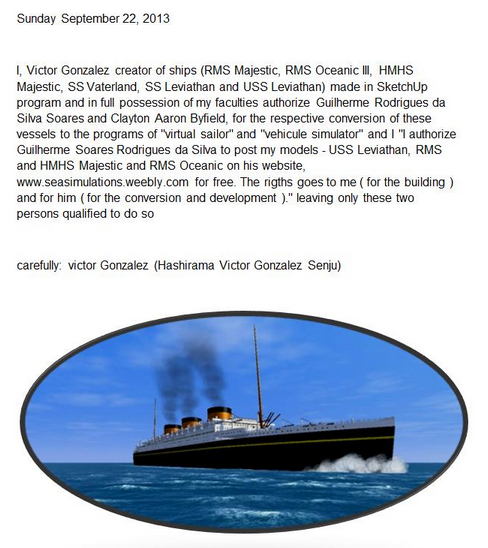